Our top tips and ideas for easily organizing an original and perfect raclette dinner.

Raclette is a unifying and convivial meal.

It’s as suitable on a cold winter evening at the chalet as it is for a romantic meal or as an alternative to cheese fondue.

Although raclette doesn’t require too much preparation, the same questions always come up:

We have prepared a short guide for you with our best advice, to easily organize a tasty and original raclette meal.

The term raclette is both the name of the meal and the cheese used for it.

Raclette cheese is made from Swiss cow’s milk in the canton of Valais.

For a raclette meal, it is usually cut into fairly thick slices (a few millimeters thick). It is not meant to be eaten as is, but rather mixed with foods of your choice.

What is the origin of raclette?

Originally, raclette was eaten by shepherds who brought with them a large wheel of this cheese, which they scraped off (racler) as it melted near a fire.

However, raclette has since evolved and now takes multiple forms:

The advantages of raclette

Raclette does not require a lot of preparation, it has the advantage of letting each person eat according to their appetite or personal taste.

And since everything can be prepared in advance, it gives you more time to enjoy the presence of your guests.

Which electric raclette oven should I choose ?

After testing different raclette oven models, my favorite ones are the rectangular models with a non-stick plate (1 ribbed and one flat).

The oven can thus be placed in the center of the table and each person can easily access it.

What you’ll need to make raclette : 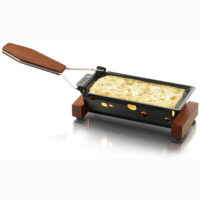 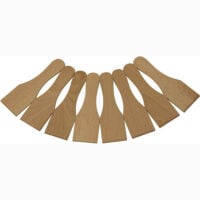 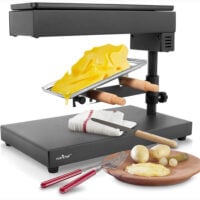 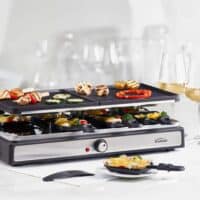 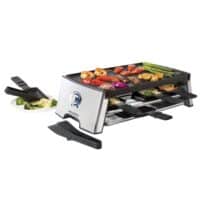 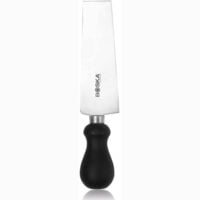 Raclette meal: what to serve as a starter and for dessert?

Since raclette is a fairly rich meal, it is better to plan a lighter starter, such as a soup or a green salad.

The same logic applies for dessert.

Choose something light and fresh, like a sorbet, fruit salad or a dessert plate where everyone can eat according to their appetite.

Choose your cheeses for raclette

How much cheese will you need?

Allow around 200 grams per person, an amount which may vary depending on the appetite of the guests.

If there are several people at the table, it’s a good idea to plan a little extra quantity of cheese.

How many varieties of cheese to choose?

It’s better to choose 2 or 3 varieties of cheese. If you choose too many different varieties, you risk getting lost in the flavors.

But again, go according to your preferences!

What varieties of cheese to choose for raclette?

There are a multitude of cheeses that can be used for raclette: mustard, pepper, beer and even blue cheese varieties.

And nothing prevents you from using other cheeses for your raclette such as Louis d’Or, aged cheddar or even mozzarella cheese. The main thing is that the cheese melts well!

For a nice balance of flavors, it is recommended to take at least one variety of classic raclette cheese and two varieties of more original cheeses. Here are a few examples:

The sides for the raclette

Here are a few side ideas to go with these delicious cheeses.

Which meats and cold cuts to choose?

Other side dishes for raclette

Some tips for a successful raclette meal

Here are some tips that will make this dinner planning easier. All you have to do is enjoy!

What can we prepare in advance?

How to eat raclette?

Here are some ideas for your trays:

And what to do with leftover cheese or cold meats?

Finally, if you have some cheese left over, don’t panic.

It’s possible to use it for gratins, in sandwiches, grilled cheese sandwiches or croque-monsieur.

If you have any deli meats, like prosciutto, you could also use it in a prosciutto and sundried tomato pasta recipe.