An easy recipe of oysters au gratin Rockfeller style, with spinach, garlic and parmesan, and without béchamel sauce.

Since this recipe can be prepared in advance, it is ideal when you are having people over for dinner!

Oysters are usually eaten raw, with a dash of lemon juice and various accompaniments (such as mignonette).

But they are also delicious served hot, au gratin or not.

Spinach, garlic, a little breadcrumbs and cheese and you’re done!

I have long made this recipe with large oysters but after several tries, I find it works best with smaller oysters.

It is also important to cut the muscle of the oyster before garnishing it to make it easier to eat once cooked.

Some useful accessories to prepare this recipe 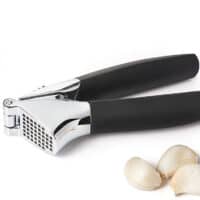 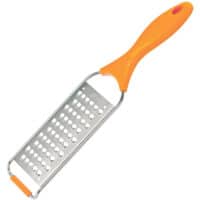 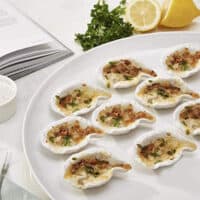 To prepare the oysters in advance

If you need to prepare a large number of oysters, or simply to get a head start, it is possible to cook the oysters beforehand, a bit like mussels.

Here’s how to prepare oysters in advance:

Once the oysters are opened, all that remains is to detach the mollusks from their shells and keep them in the refrigerator in the cooking juices until it is time to garnish and gratinate the oysters.

Believe me it saves a lot of time!

You can also cook the spinach with the garlic in advance to save a little more time.

For a dozen oysters

** You can also cook the oysters in advance, as is done for mussels, as mentioned above.